This recipe is a handy way to use up leftover egg whites if you’ve made a recipe using just the egg yolks.

More often than not, an egg white omelette is a miserable, bland and rubbery excuse for a breakfast. Usually it’s an afterthought to avoid wasting egg whites leftover from using the yolks for a specific recipe. Other times, it’s a self-imposed torture. Specifically, the dreaded “d” word – DIET. 😩

You can make a truly great egg white omelette. One that’s fluffy and cloud-like. One that looks properly appetising. And most importantly, one that’s incredibly delicious.

Think of it almost as a quick, savoury soufflé.

I’ll happily have this for breakfast, any day!

And just quickly, when I say fluffy, I mean it. THIS fluffy! ↓↓↓

What you need for this Fluffy Egg White Omelette

To make an Egg White Omelette that’s genuinely delicious, you need to add flavour because egg whites themselves are fairly bland.

Here’s what I chose to deliver maximum flavour with minimum calories, without compromising the delicate fluffiness of the omelette:

Oh, I also forgot to include 1 teaspoon of olive oil in the above photo, for sautéing the asparagus and prosciutto.

Side note on other filling options: You can really stuff this with anything you want, but just bear in mind that the heavier the filling is, the more it inhibits the fluffiness. The same goes for watery filling, like cherry tomatoes.

How to make a really great Egg White Omelette

I’m going to be honest with you: you might not nail this the first time. It might look a little messier than mine, or it might crack when you fold it.

And that’s totally ok. Having tested these egg white omelettes more times than I’ll ever admit to you, what I can tell you for sure is this: Even if it doesn’t look as neat, it will still be beautifully soufflé-like inside and delicious!

First, separate the eggs. Do this first while the eggs are fridge-cold because it’s easier to separate whites from yolks. If you have the time to leave the egg whites for 20 minutes or so to de-chill, they will fluff up better, and faster. But it’s not vital for this particular recipe (as opposed to say with a Pavlova where it’s essential).

I find it easiest to pass the yolk back and forth between the shell, allowing the whites slip out. If you’re not comfortable doing this, just hold the yolks gently in your fingers and let the whites slip through them.

You will need a 20cm/8″ non-stick oven-proof skillet for this recipe. We use just one skillet to cook the asparagus and prosciutto, followed by the omelette, before finishing it in the oven.

Sauté the asparagus in 1 teaspoon of olive oil to soften and get the faintest blush of golden colour. Add the prosciutto and stir for 30 seconds, mostly to warm it through as opposed to cooking to make it crisp. We don’t want crispy prosciutto bits poking out everywhere in our delicate omelette!

Once done, transfer into a small bowl and set aside. Wipe out the pan.

Next, add the butter for cooking the omelette into the same skillet and set the skillet on a low heat. To gauge when the pan is at the right temperature, look for when the butter has gone from foamy to having little bubbles gently sizzling in the skillet. In a perfect world this will happen at the exact moment you are ready to pour the egg whites in!

If the butter stops the gentle bubbling and starts to smoke, it is too hot. Just move the pan off the heat briefly to cool it slightly, then return it to the stove just before you finish the omelette mixture.

Next, whisk the egg whites until they become white and fluffy, but before stiff peaks form (like we do when making pavlova and meringues). See below for target thickness.

It takes me bang-on 90 seconds by hand, or 30 seconds with an electric beater on Speed 4. I prefer doing it by hand because you don’t incorporate too much air, meaning the bubbles are smaller and tighter. This gives you a neater finish on the surface of the omelette.

How much to whip the egg whites

Your goal is to whip the egg whites sufficiently so it’s thick enough for a mound to sit on the surface, yet is still pourable, as pictured below. I sometimes call this, “no peaks” – meaning it’s whipped enough to hold a shape (like a figure eight, pictured below) but will not hold soft nor stiff peaks. You definitely do NOT want to whip it so much that you have stiff peaks → ie. an “elf hat” (as pictured below).

Moving quickly, whisk the chives, salt and pepper in. Literally whisk it just 2 to 3 times to disperse. Any more than this and the egg whites can go from perfect to over-whipped and too stiff.

At this stage, you will need to move quickly! Now is not the time to deliberate over which Netflix movie you’ll watch after dinner tonight. Here’s what you need to do, and do without skipping a beat:

Next, we’re going to stuff it and finish cooking the omelette in the oven during which time it will rise a bit more.

Once you get to this stage, the omelette is half-cooked and set, and we will finish it off in the oven to fully cook through.

Smooth the surface of the omelette with a rubber spatula. Then sprinkle the asparagus and prosciutto filling across half the omelette. Top with pecorino.

You should spread the filling over the half of the omelette directly opposite the handle (as pictured above) so it’s easy to turn out on to a plate once the omelette is cooked (see below).

Transfer omelette to a 200°C/390°F pre-heated oven for 2 minutes, just to finish cooking it through. It’s quite a fluffy omelette (about 4 cm / 1.7″ tall) so if you only use the stove, the outside of the omelette ends up overcooked before the inside cooks through.

It also rises even more – I told you, we’re making a soufflé-ish omelette here!!

Remove the omelette from the oven. Run the spatula around the edges and under of the side of the omelette without topping (to ensure it’s not stuck). Now while tilting the pan slightly towards the topping side (gravity helps us with the folding), gently fold the omelette in half over the filling side.

This is the part you will have problems with if the whites are whipped until stiff because the omelette will crack when you go to fold it. If that happens, don’t fret! Just patch it up as best you can, then turn the omelette over in the pan to hide / seal the “messy” side.

Hold a plate at a 45 degree angle against the skillet. Then turn the omelette out by flipping the skillet over the plate so the omelette flips out and ends up on the plate upside down (ie. pan-contact side now facing up). Move swiftly and with confidence here – you’ve got this! And don’t worry, the soufflé-omelette is sturdier than you think. It’s fully cooked at this stage and will hold its shape for a while, until it starts cooling. You aren’t going to destroy it in this step!

Garnish with chives if desired. And why not? Your hard work deserves a pretty finishing touch. 😇 Also, egg white omelettes are always quite pale and colourless; they are supposed to be. So a splash of colour is a good thing!

And there you have it. A spectacular Egg White Omelette that is worthy of a place at the finest of bistros and hotel restaurants. Puffed and proud, inside it’s delicately soufflé-like: beautifully moist, delicate and mousse-y. It’s the absolute polar opposite of the rubbery egg white omelettes we all know and dread. 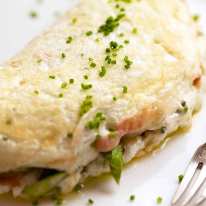 Recipe video above. If the words “Egg White Omelette” conjures visions of a bland mat of white rubber, be prepared to have your mind blown. Because this omelette is Amazing – with a capital “A”!It’s a very worthy way to use up leftover egg whites after making something using egg yolks.I’m not going to lie, you might not quite nail it first go. It might not be as fluffy, or it might not look as neat. But it doesn’t matter. You are going to enjoy every bite of this souffle-like omelette, with a flavour-loaded filling.And next time, you will nail it! : )

1. Egg whites – Fresher is better, for fluffier omelettes. To separate, pass yolk back and forth between the broken shell halves, allowing the whites to slip out. Alternatively hold the egg gently in your fingers and let the whites slip through them, keeping yolk in your hand.
2. Pecorino cheese – freshly grated, it looks like a lot more than it actually is, around 1/4 cup!
Parmesan or romano are a perfect sub here, or even kefalotyri Greek cheese (from Greek dishes like Pastitsio and Spanakopita)
3. Hot skillet timing – If the butter / skillet stops bubbling and starts to smoke, it’s too hot. Remove pan from the heat while you’re whisking the whites, then return it to heat as you get close to completing the whisked egg whites.
Timing is key here because you don’t want the whipped whites to sit around in the bowl any longer than necessary as they will start to turn back into liquid whites (you have about 30 seconds, tops). However the butter also needs to be sufficiently hot otherwise the omelette may stick to the pan or it may begin to deflate because it’s cooking too slowly.
4. Make ahead – This dish can’t be made ahead! The omelette will deflate as it cools.
4. Nutrition per omelette.

“If I close my eyes, maybe all those dirty dishes will clean themselves…” I’m thinking.

“If I close my eyes, maybe I can pretend I didn’t see all that food….” he’s thinking.

How to Cook Bacon in the Oven